This time the main project is fitting the Torqeedo, and I also have some repairs from flood damage to complete. I have about another week until the yard will put her back in the water.

The top of the Torqeedo looks way too small for someone used to the size of petrol outboards. It means I have plenty of space in the well to fit it in, and room for adding lines and blocks for steering. I’ll connect it to the main steering so that it works in unison with the rudder. 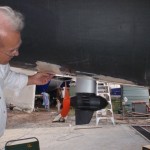 Claude lent me the book on propellers and it suggests that we need a minimum of 50mm clearance to the hull. Claude is holding a batten along the hull line to show how much clearance we have with the motor lowered to its working height.  (Click picture for bigger image).

Look how small the motor is!  The black pod is the electric motor and a reduction gear box – its amazingly small considering what thrust it produces. The Epod was much bigger than this and it means that I can reduce the size of the opening in the well. 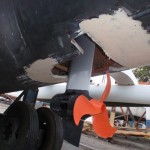 Here’s another photo showing it from the port quarter, and you can see the new work I’ve done to reduce the size of the opening. The pink areas are the fill-in work that I’ve done.  You can see how fine the prop is – I think this is part of the reason its so efficient – the fineness of the prop means it has very little friction.

My mission now is to make some flaps or a wing to block the hole when the motor is down, and also when its hauled up and the boat is under sail.

I ordered the Torqeedo on Tuesday, and Claude delivered it on Wednesday. And we installed it and it worked perfectly first time. What a breath of fresh to have things work as they should.

She was to be slipped at 4pm and so Claude brought the motor here early enough so we could go up the river beforehand and do some more tests.

This time we had three on board – the third being Phil from Dragon Song, one the inmates here at Monty’s, trapped here by contagious apathy. And this time I remembered to pull the centreboard up to reduce drag even more.

I added a piece of hardwood to the outboard bracket, which moved the mounting a little to the stern, and we adjusted the angle of the motor to what we thought to be most efficient.

Going with the tide we hit 7.5 knots, and the best we saw coming back was 5.9.  This would suggest a current of 0.8 knots going upstream, and so that makes the still water speed 6.7 knots.

Later we tinkered with raising and lowering the centre-board and it makes a difference of 0.3 to 0.4 knots.

Because the well is open at the bottom, the water sloshes around, and when under lots of power it boils around in there, absorbing quite a lot of power.  So there’s even more scope for better speed after I make a blocking wing to seal the hole.

And that’s the main reason she’s now out of the water on the trolly (again!).  It’ll take quite a few days to figure out and build suitable wings or flaps to block the hole when the motor is up, and down.  But it also gives me a chance to complete the repairs from the flood damage. Even on sunny days there’s a heavy dew till late morning, and this dampness has made it difficult to properly dry out the balsa core before doing  the repairs.  On the hard it will be easier to set up heater fans to get it properly dry.

In the tests we tried the motor at different throttle settings and think we found a ‘sweet spot’ for this boat – at around 1500 watts she lopes along at around 4.5 knots. This is a nice speed, and the batteries have enough to energy to do this for 5 or 6 hours.

These figures confirm that this motor is about twice as efficient as the Epod.  That is, at a particular speed I would get twice the range with the Torqeedo.  Or looking at it another way, switching to the Torqeedo is equivalent to adding another bank of batteries.  And at ten thousand dollars a bank, its a good investment huh.

The motor we tested a few days ago was off Claude’s boat, and the one I have now is new, out of the box.  And its seems there’s slight differences in settings of the controller – because with this controller we saw much better power astern. This controller showed up to 3000 watts of power, so I’m pleased with that.

Claude suggests there’s more to it, because the controller is clever enough to sense when there is cavitation of the prop and it automatically reduces power to allow the prop to grip.  And thats the effect we saw the other day with the lower readings. Understanding that better will have to wait until I’m back in the water.

Also on board were a motley assortment of characters from the boatyard and beyond. As well as the usual suspects, Steve and Sean, we also had some fellow electric boat afficionados in Tarci and two Bryans, and to ride shotgun for us, Claude’s son, Nicholas came along.

We pulled gently away from the dock and then ramped up the power to see what it would do at full throttle. We got her up to 5.3 knots with a little current (maybe half a knot) against us. This is more than I ever saw from the Epod (but mind you I had lost confidence and wasn’t game to give it full throttle for more than a moment when manouvring).  And this 5.3 knots is with 8 people on board.

Coming back down soon after, we topped out at 6.5 knots.  If we average these, we should expect top speed in still water to be 5.9 knots.

At maximum power it is using 4400 watts, or 90 amps from the batteries. At this power I could go for maybe two hours.  But that extra few knots of speed costs a lot in power consumption.  At a lower speed of 3.4 knots it only draws 900 watts, or 17 amps. And at this speed I could travel for over ten hours.

You should see the helm control for the Torqeedo – it has a great LCD readout showing speed, (it has its own GPS built in), power being used, battery state (such as voltage but you can choose from other options), and range left in the batteries at this speed.

For example, one of the readings showed power consumption as 500 watts, speed at 3.2 knots, and available range at this speed: 56 miles.  So its a really useful tool to have right at your finger tips.

I compared this to the Link 10 battery monitor and we found an excellent correlation. At the end of the run the battery capacity remaining, as reported by the Torqeedo controller was 84%. According to the Link 10 we had used 32 amphours, which out of a total of 200, is 16% – which means 84% remaining.

In this test we went up the river and back to the boatyard, then kept going downriver to the shallows, then back up to Monty’s, and then a few loops before we docked.  And used 32 amphours. When I first left Monty’s with the Epod, it used 50 amphours to get out of the river. This was all low speed work, and probably about half the distance we went in the Torqeedo.  There are other variables of course but its clear that the Torqeedo is more efficient than the Epod – and maybe around twice as efficient.  This effectively doubles my battery capacity.

We tried an emergency stop – that is we got her up to full speed of 5.3 knots and then put the motor into full power astern.  This was perhaps the most disappointing aspect of the Torqeedo. At full astern its maximum power demand was 1300 watts, and the slowing effect could only be described as gentle. The specs on the Torqeedo show that is limited to 50% power in reverse, but we only saw about a 30%, and that’s how it felt too.

Compare this to the Epod which has full power available in reverse and that is useful for manouvring.

The Torqeedo unit is steerable. Even though we didn’t test this on the day, I can see how I could link it to the spectra steering lines so that the motor would steer with the rudder and that would be great for close quarters manouvring.

I have some detailed figures of power and speed and if you want to see them, let me know.

I’m leaning strongly to the Torqeedo, but I’m choking on having to throw away the $8000 I’ve spent so far on the Epod.  The Torqeedo is very well engineered and I’d have confidence that it would work when I need it (well, what else would you expect, after all, it is German).  And that’s probably going to be the deciding factor, because even though I can see how to fix the Epod in such a way that it would be reliable, I’ve just about had a enough of it.

And hey, its arguably now the best engineered Epod available, so perhaps someone will buy it from me…