(last Friday) Sleep was patchy, every now and again a log calling for my attention. 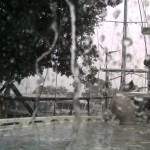 Dawn broke sopping with heavy rain and gusty E/NE wind blowing water into the back of the cabin. In the early hours a plan had formed, and so I started re-arranging some of the lines in readiness.  I’d decided to leave the jetty.

(flood photos courtesy of Chris of the double-ender)

Current Sunshine was vulnerable here – she’s so wide and that means her main hull is out in the stronger current, more subject to flotsam catching on her, and with her float even wider, offering to trap any boat that comes drifting by.

I woke Steve and Miki to help me – but it turns out they were already awake.  So they leant a hand to re-adjust the lines, and set up for moving into the little bay thats formed by the cutting for the slipway. The plan was to just loosen the lines bit by bit and let her go downstream towards the bay. Then we’d just ease her into the protected backwater of the ramp. 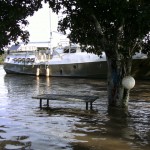 Inglelooseberg was dragging.  A big steel schooner dragging right towards Current Sunshine. Oh no. Quick, let the lines now. But no, she’s dragging too fast she’ll be on us in half a minute. I get the knife I’ll have to cut the lines. But even that is not quick enough. She’s on us already sticks her fat arse between the main hull and the outer float.

I can see the float being torn off in the next seconds.  She’s about to be destroyed.

But the big schooner stops in her tracks just as Current Sunshine starts creaking and groaning. I despair at what’s about to happen. But we have been given a second chance. By now there’s plenty of hands – others have seen whats happening. We take a moment to figure which lines to cut or release so she can swing out of the way of Ingleloosenberg and into the bay.

We cut some lines and motor her backwards quickly, with the inside float still tethered she should swing into the bay. But Ingleloosenberg is coming with her. We’re trapped. Steve notices another line that needs to be cut. Others secure Loosenberg so she stops. Finally Current Sunshine’s free and her turning circle just makes it into the protected bay of the slipway ramp.

Its 2.30am as I write this. I’m up on ‘log watch’ because the river is in flood, fairly minor so far, but enough to bring down some logs and other flotsam. Every now and then one gets stuck on the bow, and I need to don my wet weather gear and dislodge it. And every couple of minutes there’s bump-donk-donk-donk-donk as its rattles its way along the hull. And less often but more disturbing is the bump-eeeeeeeeeeeeek kind of log that scratches its way along the boat.

Crikey! She’s only just got back in the water from fitting a new bowsprit after damage in the last flood. (See Broken Mooring entry). Right now she’s moored to a jetty – in the last flood all the boats on jetties fared better than those on moorings.  I contemplated moving downstream on anchor, but there’s a gale warning for tomorrow, and it would be a more exposed position. So I decided to stay on the jetty which is well shielded from the E/NE winds.

While I’m up I might as well check the weather, and here’s what’s happening upstream in this river right now.

And is if that not enough to catch my attention, I checked out the flood warnings…  uh oh.  back to log watch.

FLOOD WARNING FOR COASTAL STREAMS BETWEEN NOOSA AND COOLANGATTA