A southerly change was predicted for Saturday afternoon and I wanted to be anchored in Farm Cove by the middle of the day to be ready for it.

Farm Cove is between the Opera House on one side and the Botanical Gardens on the other. We’d picked up a few visitors at Cockatoo Island and planned to take them for a quick sail to the Harbour Bridge and back. Saturday on the harbour is pretty busy and when we turned to sail back I wanted to have the motor ticking over gently just to help with tacking and to be sure we could easily avoid potential collisions. But the throttle was loose and I decided it was best to go straight to Farm Cove.

Jen and Ollie and troops will have to find their own way back to Cockatoo Island.  A friend’s speedboat soon appeared to take them back, and we settled in at Farm Cove.  I took Tim and Finn ashore to explore.

The southerly hit. Zero to thirty knots in 10 seconds. Current Sunshine was well anchored and rode nicely to the gale force winds. (According to the beaufort scale, wind speeds 34 – 40 knots is a gale. On Current Sunshine maximum wind was 38 knots, and on nearby Fort Denison weather station the average wind was 35 to 45 knots).  She provides a nice observation platform with the wind and spray going right past and allowing me a nice view out the main hatch while having a cuppa.

There’s a square rigger being blown down towards the far shore and seems to be struggling to keep station. There is a lot of mist in the air and its difficult to get a nice photo because it looks so washed out in the distance. Soon enough a tug appeared and warped onto her bow to pull her out. As she got closer I could see she is the James Craig. In these photos I’m looking north towards Cremorne Point. Torn spinnakers and frantically flapping jibs were the order of the day for yachts on the harbour.

In the photos keep in mind that the wind is blowing away from us, and so we see the back of the waves – even so the white caps are clearly visible.  And where I’m anchored is close to shore so there is no fetch.

Later when the wind died down enough for Tim and Finn to be picked up, only one oar remained in the dinghy, and when I went ashore the motor stopped part way – I think some wind driven rain may have affected the electricals.  I managed to guide the dinghy to the jetty at the Opera House with the one oar.  But the wind still too strong to row one-oared against it.

We hailed a water taxi, and after some brisk negotiations about price, he took us out to the mother ship, dinghy and all.

Sydney Harbour has some delightfully wild little coves that rival anchorages in the Whitsunday’s. I’d forgotten what an extensive cruising ground it is – with Pittwater, Port Jackson, Botany Bay and Port Hacking, all only a few hours sail apart it has protected waters and easy ocean cruises between ports.

Tim and Finn have joined me for a few days of exploring Sydney Harbour and first stop is Spring Cove, which is the first bay inside North Head. Back in the eighties when I used to sail here with Whitey on our ferro sloop Toorali, we regulary anchored here off Quarantine Beach – where foreign boats used to be quarantined until they were approved healthy. The three beaches here in Spring Cove are off the beaten track – even though there’s a  road to here, there’s no parking so the beaches are used mostly by boaties.

The passage from Pittwater was very demanding of the crew – particularly Finn. Here he is hard at work…

We’re to meet Tim’s cousin Jenny who will be camping on Cockatoo Island – it used to be a naval dockyard but is now heritage listed and you can camp there while exploring the old buildings, cranes, dry docks and slipways that are all still pretty much as the day it was shut down. Getting to Cockatoo Island fortunately delivered the mandatory been-there, done-that photos with the Sydney Harbour Bridge in the background.

Five long blasts from a big ship’s horn is enough to remind us that its about to claim its right-of-way, ready or not.  The official description is “four or more blasts” meaning, your intentions are not clear.  The extra blast added for emphasis, just as you would season a conversation with ‘bloody’ or to add emphasis without additional meaning. They did not agree with our course.  Here is the ship in question, together with attendent tugs.

Cockatoo Island offers berths for visiting boats at $35 per night.  But Current Sunshine is to big for the 7m length and 10m height limit. We docked against the side of the outer dock – which was a fine place to be. But the bureacracy would not agree.  Rather than take our $35 to remain tied up there they stuck to some obscure rules – so we went to anchor off Birkenhead point while the dock remained empty.

My friend Sue Van Horn introduced me to the phrase amp wanking. She and her husband Marv sailed from Alaska to Australia, and generally around this part of the Pacific on their Lord Nelson 41, Susitna, in the 90’s. Many’s the time when the main conversation between Marv and other yachties was comparing how many amps each is winning from solar panels, wind generators and so on.  And how much is going out from the fridge and the nav gear and the rest.

Sue was soon over it, and aptly named it amp wanking.

And so it is that much of this blog is amp wanking.  But not to be daunted by the pejorative title here’s more of it.  Perhaps it should have it own page and not appear in the main blog…

Anyway, the engine and battery log can better be presented graphically so instead of just boring text its just a boring graph.  But colourful. 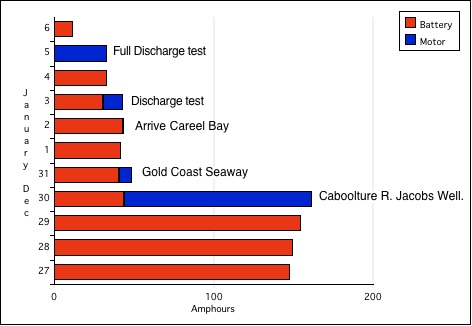