Before venturing out into the bay I want to know the actual capacity of the battery bank. Last test showed that the capacity after a couple of drawdowns had increased to about its nominal value of 200ah. But I want to be sure and to balance the pack

By monitoring the power consumption from the pack using a Link 10 battery monitor I can know its capacity. This called for a spin up the river to use some power.

After half hour there is an unexpected low voltage warning. Only about 18 amp hours have been used so this is not a good sign.

I shut off the power to the motor and check the cell modules – one of them is lights off, which indicate low voltage. This is the same cell that reached peak voltage first when charging – this cell should be the most charged so its low voltage state is perplexing. The multimeter across this cell show low voltage but rising fast – already at 3 volts. The adjacent cell is stable at 3.3 volts.

Motoring at low power is ok  – around 500 watts – and at this level the cell voltage stabilises around 3 volts.  With the motor off, or at very low watts the voltage rises to 3.2.  We return to the dock using the motor at low power with occasional skirmishes at 800 watts when the wind rises to around 10 or 12 knots.

Back at the dock with the charger on,  the voltage of the suspect cell’s voltage has risen to 3.4 v and all others are around 3.3 v.

Perhaps this cell is faulty and now has a very reduced capacity? I call EVPower and Rod suggests that I clean all the terminals and connectors to be sure its not a high resistance connection thats causing the erratic behaviour of this cell.  I had sprayed Inox on all the connections and then after tightening the bolts had sprayed some battery terminal spray on them. Both of which are insulators and this may not be helping. 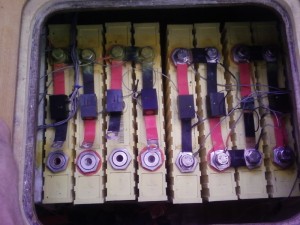 LFP batteries in the ‘larder’

Pity. I now have to clean it all off!  I have found some ‘conductive silver’ varnish which is used to repair circuit boards and the heating strips on car windows. I figure silver remain clean and conductive and will form a protective layer over the copper strips and prevent oxidation.  The picture to the left shows the batteries with terminals to the right already ‘silvered’ and those on the left unbolted ready to be put together.

To the right is a close-up of the new and the old. The yellow stuff is the terminal protector spray – which on the top hand bolt has been removed and the surface cleaned and silvered. 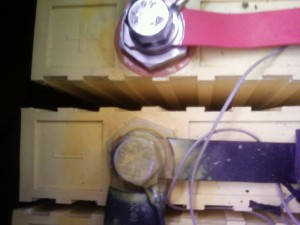 close up of new and old

I should have them back together soon and be able to load test the dodgy cell.

I’ll place this cell at the end of the series and also below the hatch so that its easy to remove if it turns out to be dodgy.  As well, if it is, I can just bypass it and use 15 cells – that will still give 50 volts.